Trump-Obamics. The Trump Doctrine is to reverse all Obama Era Actions.

Today Trump reversed the ban on importing elephant heads and other animal trophies from foreign countries such as Africa. He is reversing climate commitments, equal rights,  equal justice, fair tax laws, gender rights, and the question is, where does it end?  The Steele Dossier says that Trump hired prostitutes to urinate on the bed that Michelle and Barack Obama slept in while visiting in Moscow. Trump wanted to defile the bed they slept in. Trump is bad for America and bad for the world.  Average Americans apologize to other countries and can only hope that in time,  we fix the damage that has been caused. 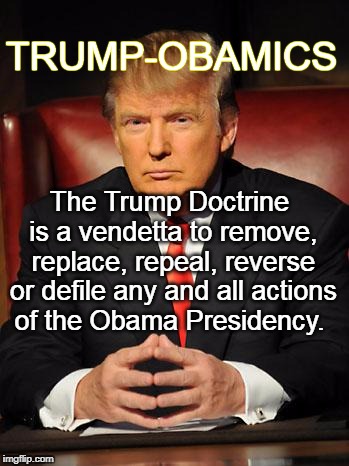