Related Posts:
Taking Jesus out of the Egg Hunt
http://mauricelacunza.blogspot.com/2011/04/school-wants-to-take-religion-out-of.html 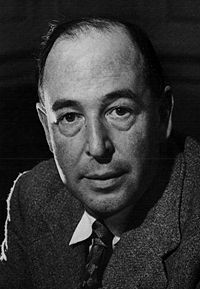 Letter from C. S. Lewis regarding homosexuality, quoted in Sheldon Vanauken's A Severe Mercy, pp. 146-148, in response to a question about a couple of Christian students of Vanauken who were homosexual and had come to him for advice:

I have seen less than you but more than I wanted of this terrible problem. I will discuss your letter with those whom I think wise in Christ. This is only an interim report. First, to map out the boundaries within which all discussion must go on, I take it for certain that the physical satisfaction of homosexual desires is sin. This leaves the homo. no worse off than any normal person who is, for whatever reason, prevented from marrying. Second, our speculations on the cause of the abnormality are not what matters and we must be content with ignorance. The disciples were not told why (in terms of efficient cause) the man was born blind (Jn. IX 1-3): only the final cause, that the works of God shd. be made manifest in him. This suggests that in homosexuality, as in every other tribulation, those works can be made manifest: i.e. that every disability conceals a vocation, if only we can find it, wh. will 'turn the necessity to glorious gain.' Of course, the first step must be to accept any privations wh., if so disabled, we can't lawfully get. The homo. has to accept sexual abstinence just as the poor man has to forego otherwise lawful pleasures because he wd. be unjust to his wife and children if he took them. That is merely a negative condition. What shd. the positive life of the homo. be? I wish I had a letter wh. a pious male homo., now dead, once wrote to me--but of course it was the sort of letter one takes care to destroy. He believed that his necessity could be turned to spiritual gain: that there were certain kinds of sympathy and understanding, a certain social role which mere men and mere women cd. not give. But it is all horribly vague and long ago. Perhaps any homo. who humbly accepts his cross and puts himself under Divine guidance will, however, be shown the way. I am sure that any attempt to evade it (e.g. by mock or quasi-marriage with a member of one's own sex even if this does not lead to any carnal act) is the wrong way. Jealousy (this another homo. admitted to me) is far more rampant and deadly among them than among us. And I don't think little concessions like wearing the clothes of the other sex in private is the right line, either. It is the duties, burdens, the characteristic virtues of the other sex, I suspect, which the patient must try to cultivate. I have mentioned humility because male homos. (I don't know about women) are rather apt, the moment they find you don't treat them with horror and contempt, to rush to the opposite pole and start implying that they are somehow superior to the normal type. I wish I could be more definite. All I have really said is that, like all other tribulations, it must be offered to God and His guidance how to use it must be sought.

This blogger has a letter from C.S. Lewis that is quite interesting. There is good in it, and, what I would consider not good but with an understanding nod towards the era in which he lived:
http://collegejay.blogspot.com/2008/10/lewis-on-homosexuality.html
Email Post